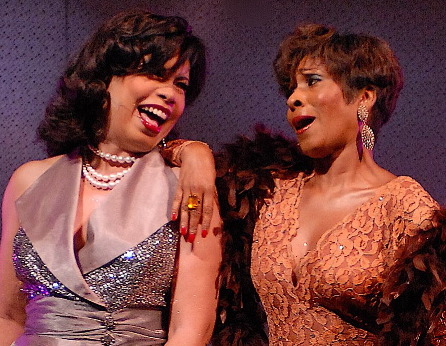 There is a 1/2 hr. sitcom treatment
based on the characters Aalda & Morris have created for
M.O.I.S.T.! 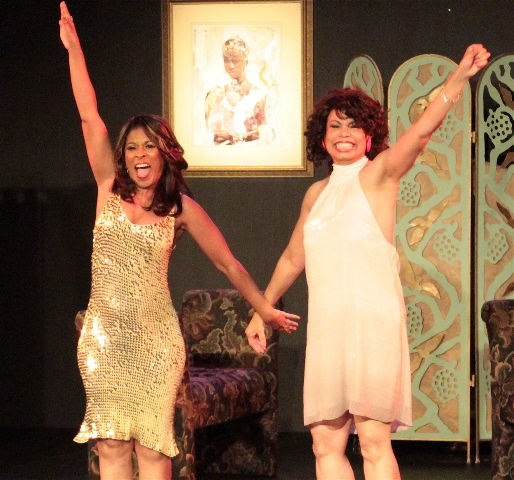 As you can see by the video clips, it's easy to imagine them playing sisters -- albeit with different life experiences --
who sometimes meet in the middle and at other times find themselves at odds...just like in real families. 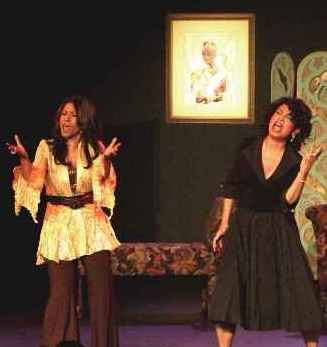 And as you can see by the wealth of experience in their demo reels...they're ready for their close-ups! 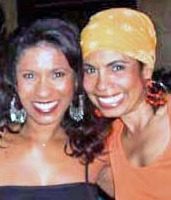 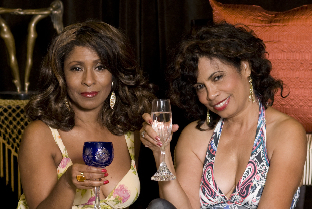 Mariann cut her teeth as a sketch-comedy writer and performer on tough NYC audiences alongside Forever Plaid creator, Stuart Ross, as a member of the award-winning Off-Center theater company, where John Leguizamo also got his start. She then honed her improvisational skills touring with The Proposition -- which also launched the comedy career of Jane Curtain. A graduate of Southern Illinois University and the Negro Ensemble Company theater training program -- where Robert Townsend and Laurence Fishburne were classmates -- she made her legitimate New York stage debut with the legendary Ossie Davis and Ruby Dee in Take It from the Top, produced by Woody King, another NY theater legend.

While numerous stage appearances followed, Mariann is primarily known for her work in television. Highlights include a long-running role on the ABC soap opera, Edge of Night, as the popular (Afternoon TV Award-winning) “DiDi Bannister;” co-starring in the films Class Act, Nobody’s Perfect, and The Wiz (TV re-run classics); and series regular roles on the CBS  sitcom, The Royal Family, as the daughter of Redd Foxx and Della Reese, and three seasons on HBO’s First and 10, playing the long-suffering wife of an adulterous football coach played by O.J. Simpson -- along with high-profile recurring roles as the tragically disfigured “Lena Hart” (proclaimed by Soap Opera Weekly as Best BAD Storyline of the Year) and “Lita (I’ll be waiting in the Beemer) Ford,” Meshach Taylor’s notoriously uppity girlfriend on CBS’ Designing Women. Most memorable of her many guest appearances include being befriended by Brett Butler on Grace Under Fire and going to-toe-to-toe with Mo’Nique on The Parkers. Mariann has also done her share of “reality” TV -- as co-host of Designs for Living on USA, and as a reporter for WNBC-TV/NY’s Now! entertainment news show.

In addition to being a co-creator/writer/producer/performer of the sexistential musical comedy, “MOIST,” with Iona Morris, other writer-producer projects include “Herotique-Aahh…,”(as one of the 3 Blacque Chix) and the cabaret act and comedy CD built around her Black Don’t Crack…But Don’t Try and Spread It Too Thin essays serialized in BlackberrySpeak.com,  a weekly humor column, “Coming Back from ‘The Edge’-- Midlife Mayhem & Miscellany with Mariann Aalda” for the popular urban news magazine, EURweb.com, and PGP Classic Soaps.

In mid-2007, she also began expanding her celebration of the “seasoned” woman  into the world of stand-up, in such places as Caroline’s and other hot, NY comedy clubs.

Iona has always been a creative, free flowing spirit.  Her talents don’t only lie on the screen or on stage, but in directing, writing, producing, voice work, cooking…This versatile, tireless performer has recurred on LAX, Moesha, The District, Passions, General Hospital, As The World Turns and she was a series regular on The Adventures of Ark for the Discovery Channel.  Ionahas guest-starred on The Shield, Star Trek: Voyager, Martin, The Wayan Bros., and many other television programs.  She is the original voice of Storm from the X-Men cartoon series and Robbie Robinson’s wife in Spiderman, along with recurring and guest roles in other animated series.  She has won two Hollywood NAACP Theater Awards and two Drama-Logue Awards.  Her regional work in Cuttin’ Up was produced at both the Cleveland Playhouse and The Pasadena Playhouse, where she was also in the cast of As Bees In Honey Drown.  Home and The Piano Lesson were staged at the Denver Center Theatre Company, and Blues For An Alabama Sky at The Sacramento Theatre Company and many other productions from L.A. to New York. Most recently, she has also renewed her passion for jazz singing

Iona is the co-creator/writer/producer/performer of the smart, sexy, new comedy “MOIST,” along with being a co-creator (and along with Mariann Aalda, half of the marketing & production team) of 3 Blacque Chix and co-writer/producer/performer of 3BC’s smash-hit comedy, “Herotique-Aahh…” She has also written three one-person shows.  Her critically acclaimed solo show For You, about her famous father, Greg Morris, from the '70's television  series Mission: Impossible, was nominated for an L.A. Weekly, Best Female Solo Performer Award and was also the show that won Iona her second NAACP Theatre Award.  Her latest project -- the exciting, sexy, new book, Woman Sensual -- is now on sale.

Iona’s, eight-year’s young passion for directing has become as important to her as her acting and she’s been getting to flex a lot in the last six years.  She directed/co-wrote Blair Underwood’s one-man show IM4; directed and was contributing-writer on Penny Johnson-Jerald’s Not My Child; directed Kim Wayans’ A Handsome Woman Retreats and the musicals SHEBAand Who Do You Love?, and assistant-directed with Sheldon Epps, Artistic Director for the Pasadena Playhouse, on the musicalPurlie, written by the late, great Ossie Davis and RAY CHARLES LIVE! written by Suzan Lori-Parks.

Additionally, Iona has created the Solo Journey Workshops, teaching people how to write and perform their own one-person show.