(Iona Morris) "...is sultry, smoldering and sinfully sexy...She'll make you a believer"
THE TOLUCAN TIMES

A  2007 University of Chicago study finds women over age 55 are enjoying sex more than women of the same age 10 years ago.This was especially true for women in their 60s and 70s.The study is based on a comparison of survey responses of more than 700 women in the mid-1990s and more than 400 women in 2004 and 2005. 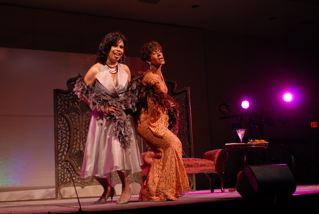 Still frisky: 'Moist' lauds the sexuality of the mature woman

The National Black Theatre Festival’s* production of Moist: Too Sexy To Be Forgotten, which opened Thursday, has been promoted as being for “mature audiences” - a double entendre of sorts, something that is a hallmark of this show.

The two-woman performance, which was co-written and co-stars Mariann Aalda (Edge of Night) and Iona Morris (General Hospital, Moesha), is an explicit combination of musical and monologue that pays tribute to the sizzling sexuality of the “mature” woman - something often overlooked, or outright shunned, by contemporary society.

The language is graphic but wryly tempered by everyday, girlfriend humor that, given the subject matter, carries the material from “blue” risqué comedy to a deeper shade of “gray-blue.”

Think of Moist as Sex In The Inner City for women over 40 (and men who wish to learn a thing or three) - still “active” and, despite popular opinion, still gunning their engines and ready to race, if they can find partners who can keep up.

And as the show repeatedly made clear, if a woman can’t find that partner, well, honey, sisters are doing for themselves these days, and having fun with it, too.

The subject matter plays on sexual taboos that have become cultural cliches and stereotypes.

When not performing their monologues - which are filled with clever one-liners (“Sometimes a one-night stand can turn into a long-term memory”) - the ladies recline on “fainting” couches. Some segments, such as Morris’ riff on self-pleasure in the Great Outdoors, were potent overtures to spoken-word erotica and literary deftness that detoured smut and tickled and teased in manners that were steamy and seductive.

The pace is quick, with monologues about sex as “the most thrilling sport in the world” interspersed with smart, bawdy songs and the odd moment of serious message, as when riffing on safe sex.

The show makes its point - Sex may be good when you’re young, but it’s great when you’re older - with humorous conviction.

As Morris said:  “If it’s better than sex baby, then you’ve never had good sex.”

In Moist!, veteran actresses Mariann Aalda and Iona Morris join together as writer/performers to shake up both the stage and our notions about, as they put it, "the stigma of sex as we get older."

Calling their revue at the Hayworth Theatre a sex-istential musical comedy, this gifted duo generates enough ebullient energy to light a boulevard.

Definitely not for the whole family, "Moist!" is an exploration of the sexual lives of two very different women in the full bloom of what Miss Brodie called one’s prime.

Ginger (Aalda) has chosen the traditional path of marriage and children, where Sonia (Morris) has remained an adventurer, circumnavigating the world of sensual pleasure including several stops in Lesbos, (which she recommends as essential to any woman seeking to experience the full luxuriousness of her own sexuality).

Oh, how easily such material could descend into raucous vulgarity and cheap laughs, but there are moments in this work that are so exquisitely poetic they approach Shavian beauty. A long wait becomes "another eternity of time" and an effort to recapture forsworn potential: "I wanted to become all that I was, only more so." Rhyming couplets abound, along with allegory and metaphor, puns and entendres doubled and tripled. Though we are never far from the bawdy, it comes dressed in sassy sophistication.

The humor is inventive and smart. 9-year old Ginger announces to her dumbfounded father that her ambition is to become a courtesan, clearly understanding early on the immutable connection for women between pleasure and treasure. Sonia ruefully notes that in fifty years of theatrical portrayal, housewives have only managed to go from mad diarists to desperate: "not exactly progress."

Aalda and Morris call their work a musical and let us pause on that notion a moment. Even charitably, neither performer can be called a true singer, yet both actresses are virtuoso vocal acrobats. The half-dozen ribald numbers that pepper the evening may not abound with flawless pitch, but

The ladies deliver the half dozen or so musical numbers that season their spicy concoction with great energy and verve. The two piece onstage band consists of keyboardist Haakon Graf and percussionist Munyungo Jackson, and is wonderful beyond measure. Providing the musical depth of a 8-piece ensemble and a sound environment that acts like a wry narrator, the band is the unseen but omnipresent third character in the revue.

Penny Johnson Jerald directs her actresses expertly, filling the tiny stage with energetic and eye-pleasing movement without either woman bumping into the immoderate but visually sumptuous set (designed by Christian Epps) or each other.

Moist! is a delightful piece of work, and a true guilty pleasure!

With plenty of backstage drama and onstage sex appeal and charm, Moist ‘takes off where Sex and the City, and the Vagina Monologues began.” For chicks and significant others, this show is sure to seduce and whet one’s appetite for what promises to be an evening of pleasure – before, during and after the play! Moist lauds itself as the quintessential, “sex-istential musical comedy,” starring Mariann Aalda, as “the little woman gone wild,” and Iona Morris, as “the love goddess of sexual freedom.”

These daring, dynamic divas share semi-autobiographic stories, candidly through dialogue and creative song, exploring sensuality, love, and female empowerment, ala “I am woman, hear me roar.”

“We’re all here to rejoice in the moist…” Set in a warm, intimate space, their stories resonate, as they embrace the moment, sharing secrets about childhood, college days, romance and getting their groove on!

Through medleys ranging from cabaret to the blues, tinged with wry humor, lessons are learned, “girlfriend style,” of the recipe to a fulfilled, sex-istential life.